Skip to content
Home/Community Partners, Donations/Pumpkins for Charity
Previous Next 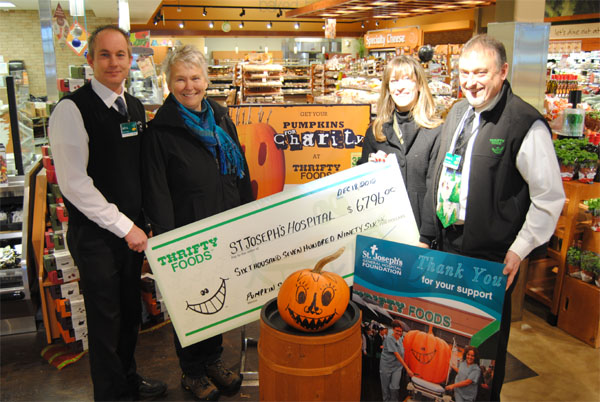 “Our teams always get behind this campaign with a tonne of passion and enthusiasm,” said Jim Dores, General Manager of Thrifty Foods. “When we hear about the programs and equipment that this fundraising initiative supports, it really brings home the need to collaborate with local hospital foundations each year.”

From October 17 until October 31, one dollar ($1) from the sale of every BC pumpkin sold at all 29 Thrifty Foods locations was donated to the hospital foundation closest to each store. This year’s fundraiser topped its 2011 donation number by over $9,000 – donating a total of $41,300 to 14 local hospital foundations throughout the Lower Mainland, Vancouver Island and Saltspring.

In total, Thrifty Foods raised over $270,300 in 2012 for local hospital foundations through both the Pumpkins for Charity fundraiser and the February 2012 Help Out One Buck at a Time campaign.