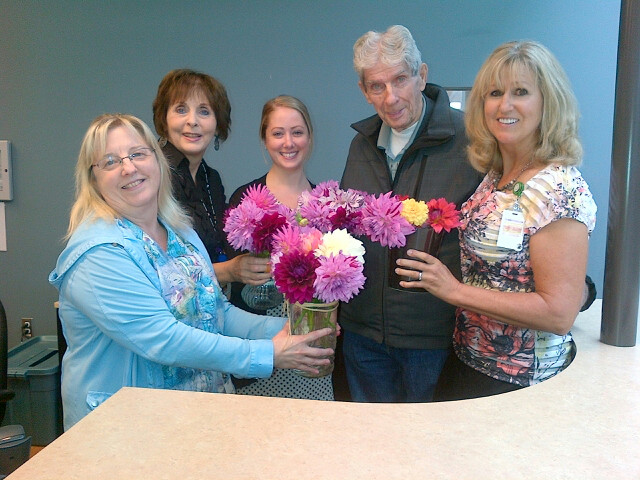 Lorne Millar (aka “The Dahlia Man”) has been bringing his basket of flowers to St. Joseph’s Hospital twice a week for 28 years. Here he is seen with some of the hospital’s front desk staff, as well as Lynn Dashkewytch from the Foundation.

He never makes a grand entrance; in fact, he tries his best not to be disruptive whenever he graces a doorway or a desk with his heaping wicker basket.

We all know him as “the Dahlia Man,” Lorne Millar, who has been coming to St. Joseph’s General Hospital (as well as many other vicinities in the Comox Valley) twice a week since 1987, in order to deliver fresh-cut flowers to staff, patients and residents.

His motivation? To show appreciation for the hard-working staff at St. Joseph’s Hospital and the community’s healthcare workers.

But don’t ask him about it – he doesn’t like the recognition, which is what makes Lorne who he is: humble and sweet, and one of the hospital’s favourite visitors.

Each year, Lorne (who’s in his nineties) plants and digs up his giant dahlias with the changing seasons, and spends his summer days cutting the beautiful flowers for his bi-weekly deliveries around the Valley. It keeps him busy, he says, and keeps him away from the TV.

In the Spring of 2015, however, Lorne was admitted to St. Joe’s for some time and wasn’t able to plant his magnificent dahlias in his yard. While the staff at the hospital was sad to see Lorne in this capacity, it gave them the opportunity to give back to the Dahlia Man after his 28 years of giving to them.

“It was heartwarming to watch the staff as they cared for Lorne over the three weeks he was in the hospital,” said Lynn Dashkewytch, Executive Director for St. Joseph’s Hospital Foundation. “ After all the years that he delivered flowers to the departments, the staff was able to care for Lorne in the same kind and compassionate way, ensuring he would be healthy enough to return home and continue to bring joy to others.”

During his stay in the hospital, Lorne’s friends and neighbours came together and planted roughly 150 dahlia bulbs on his behalf. They wanted to be sure the dahlias were planted so he could enjoy them when he got out of the hospital.

The result was both breathtaking and heartwarming.

Whether it was the hot, early summer or the magic touch of his friends, this year Lorne’s dahlias grew taller than ever last year, some over 11 feet high. They bloomed at heights and in colours that Lorne had never seen before.

It was a dahlia show for the ages.

When the dahlias were ready, so was Lorne. Just as he has done for many years, Lorne Millar returned to the hospital twice a week, delivering his beautiful dahlias to the front desk, to be dispersed throughout the hospital.

The Dahlia Man was back, quietly (and humbly) making everyone’s day a little bit more colourful.