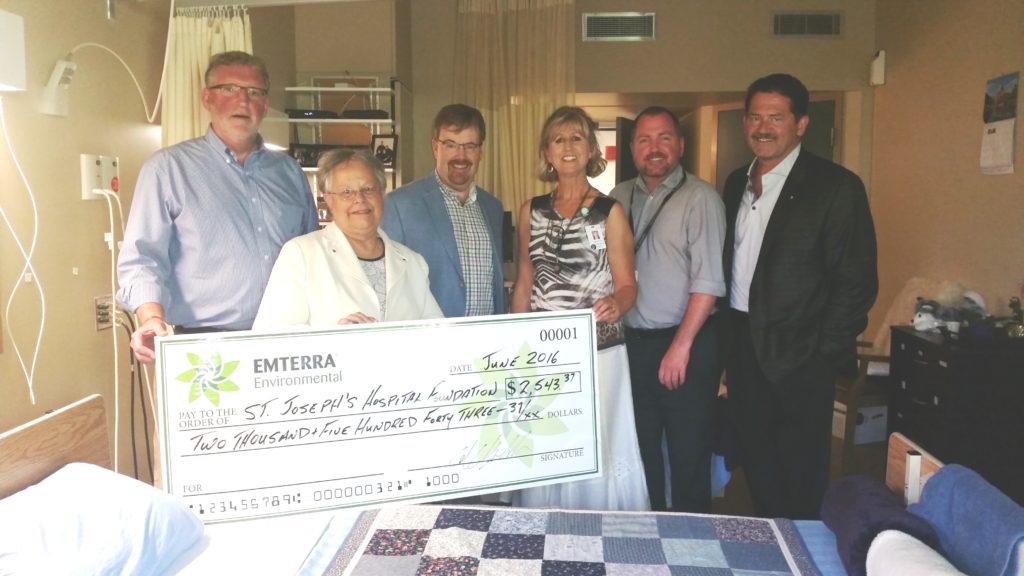 Thanks to Emterra Environmental, when you recycle in the Comox Valley, you also help improve local healthcare. Emterra is the company that provides recycling, yard waste and garbage collection for residents in the area.

Through its Community CareTM program, Make Your Contribution at the CurbTM, (MYCATC), Emterra donates $1 to the Comox Valley Healthcare Foundation (formerly St. Joseph’s Hospital Foundation) for every tonne residents recycle each year. The money is used to purchase new medical and hospital equipment.

In 2015, residents in the Comox Valley recycled 2,543 tonnes, which has resulted in a donation this week of $2,543 from Emterra Environmental to the Healthcare Foundation. Since 2009, Emterra has donated more than $12,500 towards new equipment for St. Joseph’s Hospital.

“The contribution made over the years by Comox Valley residents to our recycling initiatives has been tremendous and the growth has been fantastic,” said Ed Walsh, Emterra Environmental’s Vice President of Operations for B.C.

“The recycling rates here are as strong as Victoria, which has had a program for over 20 years,” he said, adding, “it’s such an easy way to increase funding to the Foundation; the more you recycle, the more Emterra donates.”

Emterra approached the City of Courtenay and the Town of Comox councils nearly 10 years ago to start a curbside recycling program in the Comox Valley, which evolved into the blue box program seen today. Because the community was basically starting its recycling program from scratch, Walsh saw an opportunity to give back to the Comox Valley through recycling. His reasons were personal.

“I was diagnosed with Hodgkin’s lymphoma 15 years ago and went through eight months of chemo,” he said. “I wanted this fundraising initiative to be hospital related because I was really well looked after in Victoria, and I appreciated that.

“Because of that, local hospitals are near and dear to my heart, so I said, let’s see what we can do in this community.”

Both Comox and Courtenay councils fully supported Walsh’s idea and jumped at the opportunity.

This year the $2,543 donated by Emterra is going towards the purchase of two TheraGlide chairs for The Views, St. Joseph’s Residential Care facility. These chairs will increase the comfort and quality of life for frail and elderly residents living in The Views. When the new Comox Valley Hospital opens, the chairs will stay at the St. Joseph’s site, which will continue operating residential and hospice care.

“Many residents have mobility issues and spend their day in a chair or their bed,”  says Lynn Dashkewytch, Executive Director of Comox Valley Healthcare Foundation. “Having specialty beds and chairs that provide features to enhance comfort and safety is so important.   We are so thankful for Emterra’s  generous donation again this year and we are grateful that Emterra shares our vision to help support and enhance quality of life for the residents at St. Joseph’s.”

The Comox Valley is currently the only community in B.C. that participates in MYCATC and gives back through its recycling. Walsh says that feedback from local residents has been very positive, and when people find out how far their recycling goes in the Valley, they want to do more.

“I encourage residents to put their recycling more,” Walsh said. “Not only is it good for the environment by saving space at the landfill and reducing greenhouse gases, it also allows us to purchase equipment at St. Joseph’s hospital, so it’s a multiple win situation.”

“One tonne of recycling does so much more than you think.”

Emterra Environmental is a division of Emterra Group, a leader in waste resource management. A family owned and operated company, Emterra is comprised of four division offering municipal and industrial, commercial and institutional (ICI) customers with a fully integrated approach to collecting, processing and marketing waste, recyclable packaging and printed paper, organic waste, used tires and waste liquids. Driven by its mandate to increase the sustainability of its operations, Emterra is one of Canada’s most progressive users of alternative green fleet technology including using CNG vehicles, building a network of CNG fueling stations and operating optical sorting equipment in its recycling plants.

Emterra has operations in British Columbia, Saskatchewan, Manitoba, Ontario, and Michigan, USA and annually ships approximately 500,000 tonnes of recyclables to end-markets to be re-manufactured into new products.