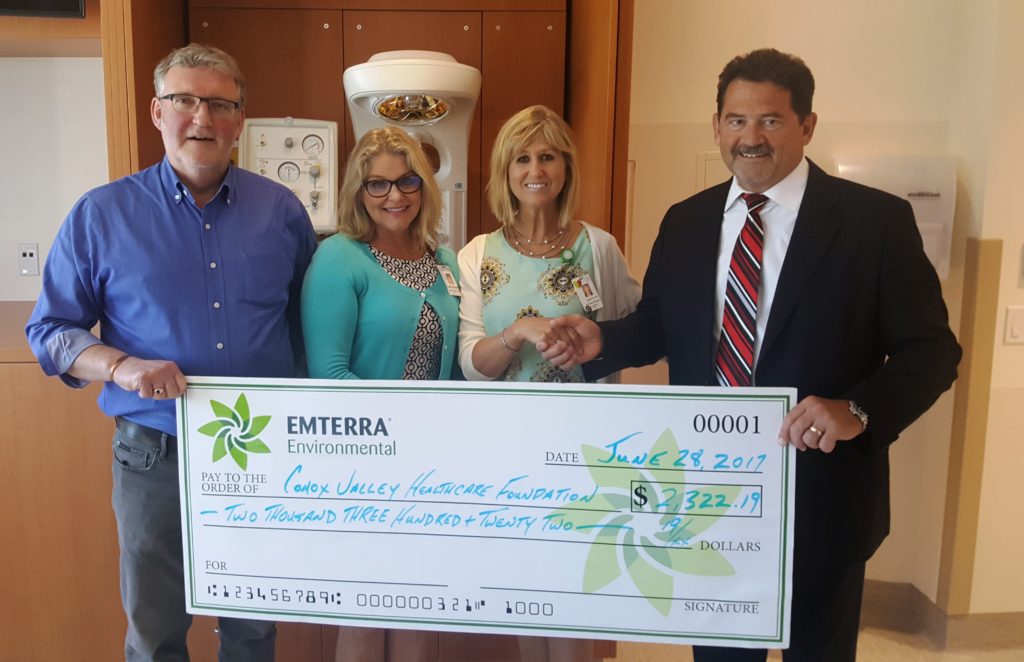 Through Emterra Environmental’s “Make Your Contribution at the CurbTM” (MYCATC) Community CareTM program, $1 for every tonne of recyclables Emterra collects from residents in the Comox Valley is donated to the Comox Valley Healthcare Foundation (CVHF) to purchase medical equipment for St. Joseph’s and the new hospital.

Last year Emterra collected over 2,322 tonnes of recyclables in the community and, on June 28, presented a cheque for the same amount to CVHF to purchase two fetal link monitors for the maternity labour and delivery department at the new North Island Hospital, Comox Valley site.

Fetal monitors are used to keep track of a baby’s heart rate during pregnancy, labour and delivery, and to inform caregivers on the baby’s progress.

“Certainly for Emterra, we’ve focused our fundraising efforts in Comox in mainly two areas: pediatrics and prenatal, and cancer care. I have a history with Hodgkin’s lymphoma from years ago, so supporting both parts of the hospital is important to me,” said Ed Walsh, Emterra’s VP of Operations in BC.

“I really like the idea of buying a piece of equipment. It gives us a sense of wellbeing and allows us to make ongoing contributions to improving hospital care.”

In total, Emterra has donated over $14,800 since 2009 to purchase medical equipment in our community through MYCATC, and because the Comox Valley recycled 300 more tonnes than in 2015, Emterra was able to donate an even larger amount this year.

This ongoing partnership with CVHF will be recognized on the Foundation’s new Donor Wall which will be installed at the new hospital this summer.

“We are so thankful for Emterra’s continuing support of local healthcare needs,” said Lynn Dashkewytch, Executive Director at CVHF. “They have been a great community partner for many years, supporting the purchase of new equipment, as well as participating in our annual Golf Classic. What a great way to give back to our local healthcare system while helping the environment.”

“Our mandate, not only here in the Comox Valley but also throughout BC, and in Ontario, Manitoba and Saskatchewan has always been to support initiatives that improve the health and well-being of the community. But here, this hospital has always been especially important to us,” Walsh said.

Emterra was the first organization to present a cheque to CVHF inside the new hospital. To recognize their ongoing donations, Walsh and local Emterra manager Dave Ross were greeted by Cathie Sturam, site director at the new hospital who gave them a tour of Pediatrics, Labour and Delivery and the Emergency Departments.

“I think the new hospital has a welcoming design,” Walsh said following the tour. “It’s beautifully laid out, and I think the Comox Valley has many reasons to be proud of this hospital. It really looks fantastic.

“CVHF raises a tremendous amount of money here,” he added. “It’s a credit to your Foundation and the community that you are able to support so successfully the ongoing need for medical equipment for St. Joseph’s and the new hospital.”

He emphasized that residents can increase the amount Emterra gives to the Foundation each year by making sure they recycle everything that’s accepted in the local recycling program.

Who knew that recycling could help enhance or save a life?

To learn more about Emterra Environmental’s local Make Your Contribution at the Curb™ program, visit: http://www.emterra.ca/MYCATC-Courtenay-Comox