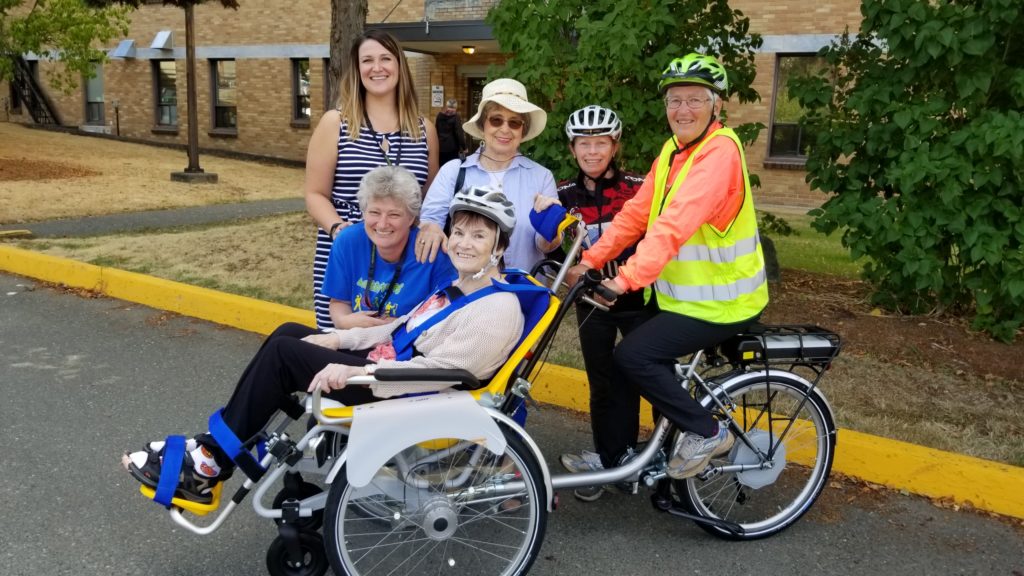 Two local donors, Karen Gray and Wendy Prothero, have fully funded a duet bike for The Views, a specialty bike that will give residents the opportunity to get outside and safely go for a ride around the neighbourhood.

Prothero, an avid cyclist, had considered purchasing a duet bike for her husband who had Parkinson’s disease, but it didn’t work out before he passed away. Late last year she approached the Comox Valley Healthcare Foundation (CVHF) to ask if she could contribute to the purchase of a duet bike for The Views. At the time CVHF had been fundraising for special initiatives at The Views, and Prothero thought the duet bike would be a perfect fit to help increase residents’ quality of life.

“After my husband died I started volunteering at The Views and thought it would be nice to have here,” she said. “I’ve seen photos of residents in facilities being driven on the bike with big smiles on their faces and the breeze blowing by. It gets them out in the community and I think that’s important for people, so that was my motivation.”

A second donor, Gray, also wanted to make a difference in The Views, and offered to fund the rest of the duet bike through CVHF.

“I was born in this hospital,” Gray said. “I was a volunteer for a long time and have been with the Auxiliary for many years, so I have nothing but pride in this facility and I have high hopes for its future. I just think that The Views is one of the most fabulous places there is. Now that I know what the duet bike can do for so many people I’m really pleased to see that it’s here and that it’s going to be well used.”

Also contributing to this special recreational bike is Simon’s Cycles, who donated the helmets, safety vests, safety flag and maintenance. When approached to see if Simon’s Cycles would be able to donate the maintenance to upkeep the duet bike, co-owner Patti Fletcher said they were grateful to be asked.

“Simon and I have a very fond relationship with The Views as my mom spent her final years here, and we saw what an incredible place it was and how well she was cared for and the family she found here,” Fletcher said.

“The bike was the absolute perfect fit because we know the joy of what cycling brings to people, and every time I get on my bike I feel like I’m 10 years old again and a lot of people feel that. It brings that wonder, joy and freedom of childhood to everyone, so how wonderful that we could be a part of that.”

The duet bike complements The Views’ implementation of the Eden Alternative philosophy of care, which combats loneliness, boredom and helplessness in complex care facilities by promoting spontaneity, meaningful opportunities, loving companionship and growth.

Anne Darbyshire, a resident in The Views, was one of the first residents to go for a ride on the duet bike on August 25thand was asked about her experience.

“I think it’s a great idea,” she said after her ride. “I had a stroke last August and I ended up in the hospital, of course. This left leg is dead but it’s coming to life now, and I’m hoping to walk for my granddaughter’s wedding in October.”

Brenda Phillips, Director of Resident Lifestyles and Community Programs, has been working hard to bring the duet bike to St. Joseph’s since Prothero first suggested it. Now that it’s here, Phillips is excited to see so many volunteers and family members interested in being drivers and helping residents get out and about.

She is hopeful that the duet bike program will officially launch by mid-September.

“Being able to spend the time outside in the neighbourhood and getting a different view other than the one inside is wonderful,” Phillips said. “We’re very grateful for the opportunity to have this here for our residents.”