Skip to content
Home/Donations, News/Ron Fortin gives to kids ‘because he can’
Previous Next

Ron Fortin gives to kids ‘because he can’ 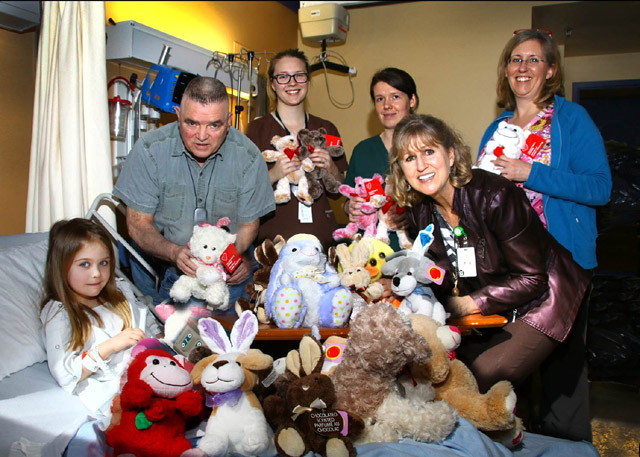 When an upset, sad or scared child at St. Joseph’s Hospital is handed a teddy bear, odds are that the bear was donated to the hospital by Ron Fortin.

For over three decades, Fortin has donated truckloads upon truckloads of toys and teddies to comfort kids at St. Joseph’s Hospital.

“It’s sad to see a kid in a waiting room of a hospital scared,” Fortin said, when asked why he chooses to give to children at St. Joseph’s Hospital.

“I don’t like seeing people sick or hurt, especially children, so wherever I can help, if there’s something I can do, then I like to do it. Providing toys is one way.”

Fortin regularly drops off his bags of new teddy bears to either St. Joseph’s Hospital Foundation, hospital staff or to volunteers then leaves to carry on with his day; he doesn’t usually hear or see how his donations help comfort the community’s sick or hurt kids, but one day a doctor told Fortin that he had given a teddy to a young patient waiting to go into surgery.

“Apparently it made the kid a lot more comfortable and a lot less nervous – so that’s why I do it,” Fortin said.

“When I was a kid I severely cut a finger one day on a bottle of milk – back when they had bottles of milk – and I needed to have seven stitches. I waited four-and-a-half hours in a waiting room with absolutely nothing, just holding my finger trying to stop it from bleeding. I think (having a teddy bear) might’ve made me less nervous – it would have been nice to have something to take comfort in.”

Fortin’s legacy of giving started in his twenties when he was in the Department of National Defence’s Canadian Reserve Force. At Christmas, he would help his father buy toys for children and wrap them up, then hand them out to the kids at a Christmas party.

Once he joined the Regular Forces and was posted to CFB Comox in 1985, Fortin joined the Gold Wing Road Riders Association motorcycle club. Naturally Fortin participated in their Teddy Bear Rides, and would bring in more teddies for St. Joseph’s Hospital than anyone asked for. When the motorcycle club stopped operating, Fortin’s teddy-bear drive did not, and he continued to bring them to the hospital on his own.

“When it starts to get harder then I might start bugging other people,” he added, with a smile.

“Ron Fortin is truly one of our hospital’s unsung heroes,” said Lynn Dashkewytch, Executive Director of the Hospital Foundation. “He has such a big heart for our community’s hospital and he shows it in this quiet and humble way.”

“We can’t thank him enough for all he has done and continues to do. He is truly remarkable.”

When asked what his favourite part of giving to the hospital is, Fortin replied:

“Knowing that I can do it, and I like doing it. Sometimes I’ll go into a restaurant and buy someone’s supper, and they’ll ask why I do it – I say, ‘Because I can.’”